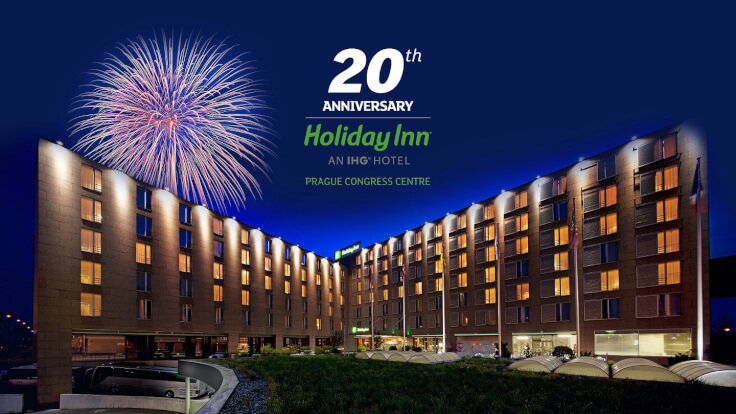 Holiday Inn Prague was the first Prague design hotel with rooms furnished in contemporary style offering its clients top gastronomic services and conference facilities. Exceptionally pure and airy interior design of the hotel with exclusive materials and artefacts by the leading international and domestic designers is the work of Mimolimit studio under the leadership of architect Barbora Škorpilová. Since 16 April 2001, the hotel has been part of one of the largest international hotel chains: InterContinental Hotels Group Limited, under a franchise contract.

At the end of 2001, the Holiday Inn Prague Congress Centre was awarded by a nine-member jury of architects, urban planners and investment experts as the best hotel project in the prestigious "Best of Realty 2001" competition. For the then Director General Dr. Jan Filip, this honour was especially "a great satisfaction, that the model of a modern design hotel is appropriate, despite the initial distrust and effortful persuading".

In 2005, Café Restaurant Esprit at the Holiday Inn Prague Congress Centre won the first prize in prestigious national competition "TOP 50 hotel restaurants" and to this day, the Esprit Restaurant is sought after especially for its top gastronomy, professional service and pleasant atmosphere. At present, it also focuses on catering services and it offers well-known themed brunches prepared by the team of famous chef Jan Wiesner.

Part of the hotel is the Délicatesse Bistro with a summer terrace, which is the perfect place for a short stop and restoring strength on the way to a business meeting or to Vyšehrad, one of Prague`s top historical sites. Excellent coffee, breakfast, lunch menu, fresh salads, sandwiches and desserts are prepared every day by master confectioner Stanislav Rojt and his team.

During the two decades, many honoured guests visited the hotel – among them was Sir Nicholas Winton, or musicians who performed at the Prague Congress Centre, such as Mireille Mathieu, Suzanne Snyder or Jethro Tull.

The hotel also hosted many social events. Clients` favourite place is the unique hotel garden with a terrace and a panoramic view of the city and Prague Castle. It has been a venue of numerous formal and informal events, including the legendary Strawberry party – an annual event for clients, offering varied entertainment and culinary delicacies. At present, the garden continues to be a popular place for weddings and traditional and non-traditional events.

The general directors of the hotel in recent years were: Dr. Jan Filip, Klára Dytrychová, Petr Veselý and from 2017 to 2020 it was Zdeněk Kovařík. During his tenure, the last stage of ambitious reconstruction of hotel rooms was successfully completed, which aimed only at one thing – to increase the comfort and quality of accommodation services. The demanding project also included installing upgraded technologies. Today, there are 3 room categories available to guests: Standard, Executive, and Executive Suite., and the hotel is run by the Director General Lenka Žlebková

The next stage of reconstruction is planned for 2022, when the lobby and reception will take on a new look. It is the so-called "Holiday Inn Open Lobby Concept", which aims to completely change the traditional perception of public hotel spaces. The purpose is to bring these spaces closer to guests and make the lobby an ideal place to work, relax, refresh, and have fun.