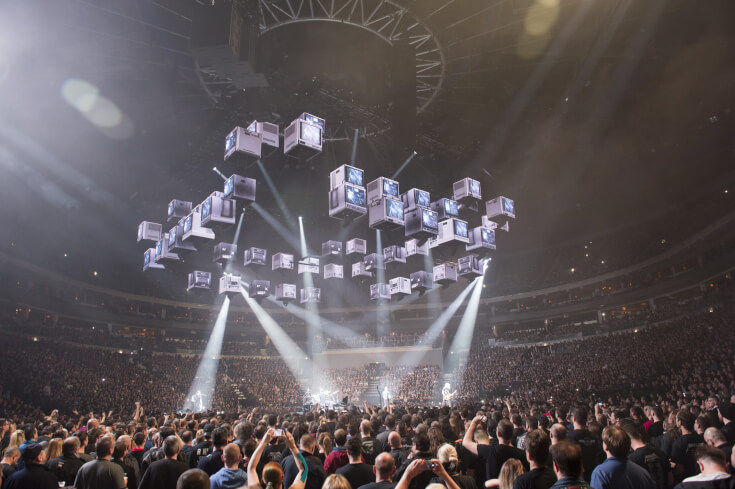 The largest Czech multifunctional hall, Prague's O2 arena, celebrated eighteen years since its first official international event, the first match at the 2004 IIHF Ice Hockey World Championship, on 24th April. So far, more than 1,600 events have been held at the O2 arena, which have been visited by almost 12 million viewers.

The O2 arena with a capacity of up to 20,000 seats is one of the largest arenas in Europe. It was the World Ice Hockey Championship that was the impulse for the construction. The foundation stone of the hall, then still Sazka Arena, was laid on 27th October 2002.

Up until now, the events at the O2 arena have been visited by almost 12 million fans. "I am pleased that since 2011 we have managed to continuously increase the annual attendance from about half a million to almost a million viewers a year," says Robert Schaffer, Director of the O2 arena and O2 universu and Chairman of the Board of Directors of Bestsport, which is the owner and operator of both buildings. The visitor record is still held by the American band Metallica, which was attended by 20,174 spectators in 2018.

Over the long 18 years, the O2 arena programme has featured the most famous names of world performers such as Madonna, Elton John, Paul McCartney, Hans Zimmer, and Celine Dion.

The largest Czech arena is also known as the venue of various sports events. Ice hockey matches are also often held here thanks to the home team of HC Sparta Praha. Tennis events have always been among the most visited, whether it was the Fed Cup Final, Davis Cup or the successful first ever Laver Cup. Many other sports events have been held here.

However, the difficult covid period has seen a huge decline in events. "The period of the last two years has been extremely difficult due to the coronavirus pandemic, probably the most difficult I have experienced in my eleven years here. Basically, we had to migrate the entire 2020 calendar to 2021 and then back to 2022. That was really hard not only for us, but also for the fans. But now I believe that we are out of the worst, this year is a busy one, we are gradually 'dispatching' one event after another and there are also increasing demands for new ones for the next years, which makes me very happy," says Robert Schaffer.

In addition to the O2 arena and a parking house with a capacity of 1,400 seats, the portfolio of buildings managed by Bestsport expanded in 2019, when a new multifunctional and meetings centre O2 universum - the former small hall adjacent to the large one - was open.  It is an extensive complex with 21 halls of different sizes. The largest one with a capacity of up to 5,000 people is where most often the concerts of domestic and foreign artists take place. The remaining smaller halls with a capacity ranging from 100 to 1,000 seats are ideal for meetings and corporate events.

The coordination of the O2 arena and O2 universum functions especially during large sports events. O2 universum is also often used as a training hall, with the main competitions taking place in the O2 arena.

Most recently, the modern STAGES HOTEL Prague located in the immediate vicinity of the O2 arena and O2 universum, which was opened on 1 November 2021, has become a part of Bestsport.

In 2017, O2 arena was nominated as one of the five best concert arenas in the world in the prestigious Pollstar Awards competition, O2 universum won the Building of the Year award in 2020. After just a few months of operation, STAGES HOTEL Prague ranked among the top five hotels based on guest satisfaction ratings, and it won the first place for the best hospitality (F&B services) among the Tribute Portfolio hotels in the first quarter of this year.

The gastro department of the O2 arena can offer some interesting statistics too. During the 18 years of operation of the largest Czech hall, 850,000 servings of pizza, 750,000 servings of popcorn were eaten, 1,350,000 sausages were sold and 11 million beers were draughed VIP catering on the Club Floor and in the Skyboxes is appreciated very highly by guests, as it is always adapted to the type of event, from the Italian menu at Andrea Bocelli's concert to the Caribbean drinks at the Rihanna show.