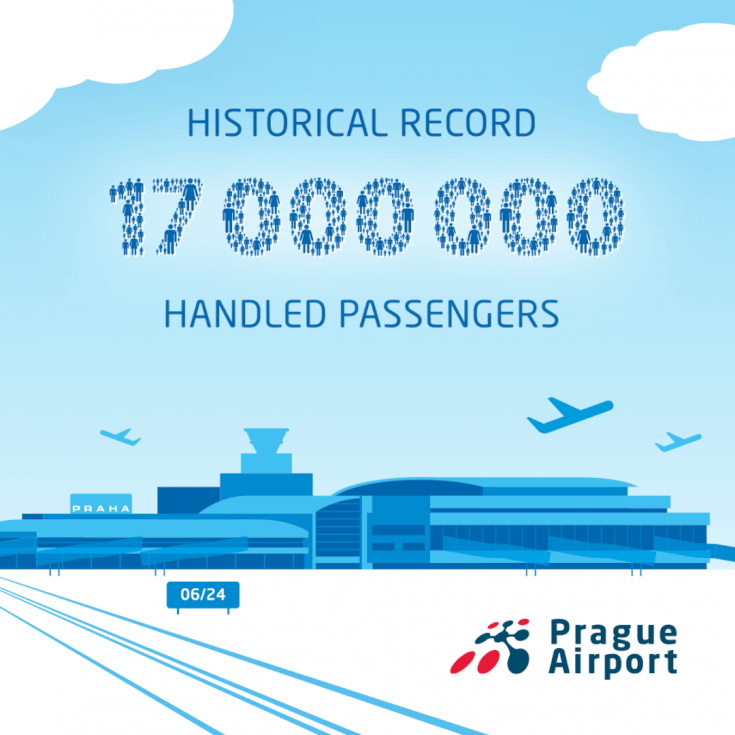 For the fourth time in a row, a historic record was set at Václav Havel Airport Prague on Friday, 13 December 2019. The number of handled passengers a year reached the 17 million mark before noon.

The development of direct scheduled connections, including long-haul routes with the highest number in modern airport’s history, the ever-increasing aircraft load factor and capacity increases on existing routes, have contributed to the current 2019 results. The most popular destinations traditionally include London, Amsterdam, Moscow and Paris.

On average, approximately 49,000 passengers have passed through the gates of Václav Havel Airport Prague a day since the beginning of the year. So far, the busiest month in Prague was August, with 1,997,182 handled passengers.

“After a year later, we are celebrating another significant milestone in the airport’s history. On Friday, 13 December 2019, we have reached the mark of 17 million handled passengers at Václav Havel Airport Prague. However, this excellent result brings the airport to the very limit of its operational capacity. Further increases expected next year, may already influence passenger comfort. That is why it is necessary to kick-off the preparation stages of long-term airport development as soon as possible. Some of our development projects were already launched. In January 2020, the fourth line with new check-in counters will be open at Terminal 2 and the reconstruction of the baggage sorting centre will continue with next stage,” Vaclav Rehor, Chairman of the Prague Airport Board of Directors, said.

Long term, Prague Airport has been among Europe's fastest growing airports in the category of 10 to 25 million handled passengers a year. In the three quarters of 2019, Prague Airport recorded a 5.73% increase in the number of passengers handled, while the European average was at 4.1% (ACI). In October this year, the airport recorded a year-on-year increase of 8.13% compared to October 2018 and, according to the latest results, November was also very successful, with 6.7% more passengers passing through the airport than the year before.