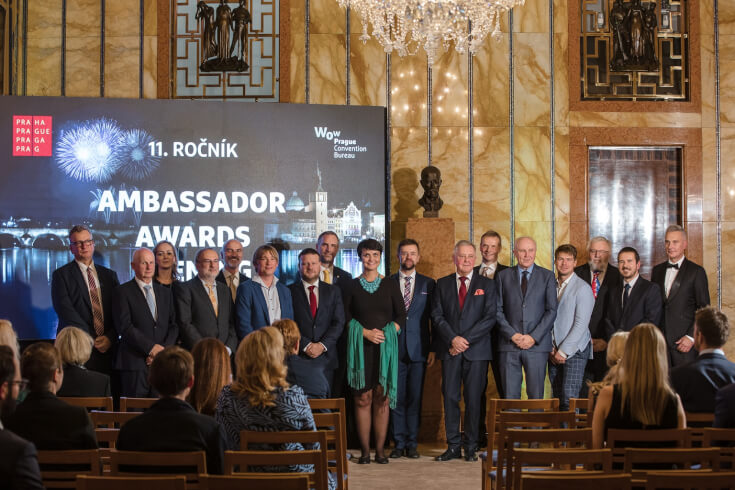 After an enforced coronavirus pause, Prague honoured outstanding Czech scientists, professors, doctors, and other top experts for their contribution to the meetings industry in the Czech capital again. This year, the Prague Convention Bureau, organisation providing umbrella to the Prague meetings industry, acknowledged the efforts of congress ambassadors over the previous three years at the 11th Annual Ambassador Awards Evening. The ceremony of presenting 11 awards took place on 6th September 2022 at the Residence of the Mayor of Prague.

The Ambassador Awards Evening was held under the auspices of the Mayor of the City of Prague Zdeněk Hřib, who also attended the event in person, along with other representatives of the city and the Ministry of Regional Development. At the gala evening, which had to be postponed due to restrictions on mass events during the pandemic, the mayor personally presented the 2019 awards to their winners. At the same time, special awards for the support of the meetings industry during the pandemic period, in 2020 and 2021 i.e., were also presented.

Almost 1,500 delegates attended the Society's first annual meeting, which also included recovered paediatric oncology patients and their parents. A photographic exhibition, My New Life, was also dedicated to them.

The European Congress on Endometriosis 2019 became the most modern organized congress in the history of these events. It also included live broadcasts of surgical procedures in France, Italy, and Japan.

-       Mgr. Martina Lehmannová for the 26th General Conference of the International Council of Museums ICOM

Initially losing candidacy to rival Alexandria, the event was successfully won for 2022 for Prague. As a result, Prague welcomed over 3,000 museum science experts this August to the conference, which involved more than 150 museums across the country.

The event takes place biannually and was held for the first time in the Central and Eastern Europe region. The conference, which showcased the latest audio-visual technology, was attended by 350 professionals from all over the world.

A ten-day non-stop happening with nearly 21,000 participants aiming to walk or run as many kilometres as possible. The kilometres are then, thanks to the event’s partners, transformed into financial aid for abandoned children. The biggest benefit of the project is not only the financial support, but also spreading the awareness about the aspects of life of children growing up in institutional care. TERIBEAR is a project of the Tereza Maxová Foundation and is currently the most significant charity event of its kind in the Czech Republic.

Long-Term Contribution to the Meetings Industry:

Prof. Jan Betka is an extraordinary personality of Czech otorhinolaryngology consistently supporting Prague as a congress destination. In the past, professor Betka has brought key contributions to organising numerous scientific events, such as the 3rd Congress of the European ENT-HNS Society or the annual meetings of the Czech Society of ENT and Head and Neck Surgery.

"The meetings industry, which normally generates in multiplication over CZK 260 billion (nearly EUR 10.5 billion) in revenue annually, has, due to the pandemic, almost sunk to the very bottom in last two years. The number of events in Prague in 2021 fell by more than 79% compared to 2019," says Roman Muška, Managing Director of the Prague Convention Bureau, adding: "I am all the more pleased that this year, with the delay, we were able to present not only the well-deserved awards for 2019, but also to recognise those congresses and conferences whose organisers decided to hold their events despite the situation and under strict hygienic conditions, often using the latest technologies."

The special award for the support of the congress industry in 2020 and 2021 went to Metrostav company for its 50th anniversary event for over 7,000 current and former employees (the award was accepted by Ing. Jaroslav Heran). A large number of conferences and congresses took place during the pandemic virtually or in hybrid form, allowing delegates to choose whether to attend the event in person at the venue or remotely via virtual platforms. Two of the events winning special awards were held in hybrid form. The first was the World Environmental Education Congress (WEEC), with the award collected by doc. PhDr. Jan Činčera, Ph.D., and doc. Mgr. Bohuslav Binka, Ph.D. The second awarded hybrid congress was the International Union of Crystallography Congress (IUCR, the award was accepted by prof. RNDr. Radomír Kužel, CSc.). The International Conference on Intelligent Robots and Systems (IROS) had to be transformed fully into the virtual form, with the ambassador Ing. Libor Přeučil, CSc. receiving another of the special awards. The last prize was collected by prof. Ivan Rychlík, MD, CSc., FASN, FERA, for his candidacy for the European Renal Association Congress, which is due to take place in Prague in 2025. “We have been working on the candidacy for 2025 for more than 6 years; in the peak phase of preparation the mayor of Prague actively joined the candidacy and met personally with the ERA President to convince him of the suitability of Prague as a destination for the Congress. Winning the ERA Congress for Prague is one of the imaginary highlights in the field of the meetings industry," said professor Rychlík about the candidacy.

We would like to thank to the partners of the Ambassador Awards Evening, namely: the City of Prague, Ministry of Regional Development and CzechTourism / Czech Convention Bureau for their cooperation!

Photo gallery from the event is already available on our Facebook.