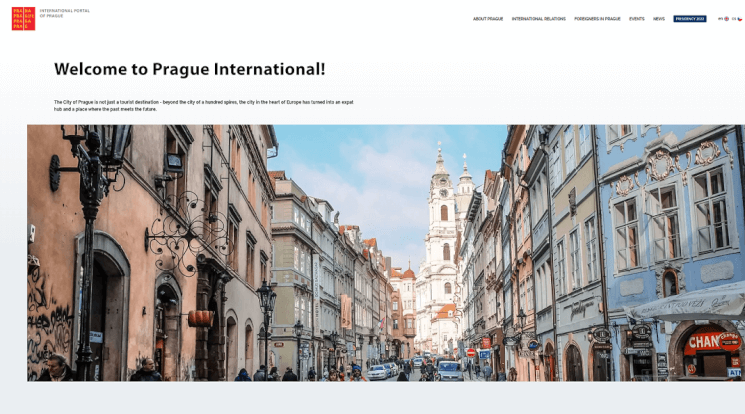 Czech capital city has been intensely preparing for the upcoming Presidency of the Czech Republic of the Council of the European Union, during which a number of key events will take place on its territory from 1 July 2022 to the end of the year.

About these and other topics the new international.praha.eu website will inform; it will also introduce Prague from the foreign affairs point of view to locals and foreigners in the future.

The newly launched international.praha.eu website, which is available in both English and Czech, will serve as a platform for presenting Prague as an important driver of international relations. The capital city is launching it with regard to its active role in the upcoming Presidency of the Czech Republic of the Council of the EU.

"Prague wants to use the presidency period to show that it is not only a mass tourist destination, but also a metropolis boasting high-quality universities and emerging innovative projects in a number of sectors – from artificial intelligence, through space technologies to cultural and creative industries," says the Mayor of Prague, Zdeněk Hřib, who is also in charge of foreign relations.

The capital city is currently preparing a new foreign relations strategy for the upcoming 5 years, which emphasizes the creation of strong partnerships in the international environment, the use of the potential of previously established partnerships, strategic communication of Prague's strengths and a more confident approach in the field of foreign relations. This strategy will strengthen Prague's position as an attractive city for living and working in the awareness of city residents, visitors and potential investors.