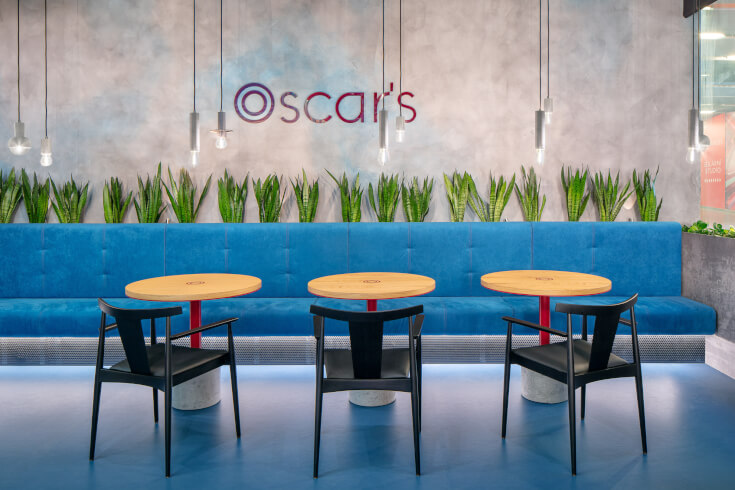 The Oscar's bar in Prague, which is part of the Vienna House Andel's Prague hotel, has undergone a complete renovation. The aim was to open a modern establishment in Prague's Smíchov district, where hotel guests and working people in the surrounding offices will feel comfortable. They can visit the bar for a business meeting, combined with lunch, or for a drink after work. The interior design was completed by the Jestico+Whiles architectural studio, the studio that was behind the original design of the hotel, which opened in 2002.

"The hotel business has changed significantly in the last two years. Foreign tourists, which were our primary focus in the past, are now few, and we do not expect the situation to change significantly in the coming years. Instead of waiting, we have therefore decided to look for opportunities elsewhere and open up more to local customers." explains Kateřina Joklová, General Manager of Vienna House Andel's Prague.

"Over the last few years we have managed to renovate the entire hotel. The only place that lacked renovation was Oscar's bar. It is a unique meeting place and the centre of the hotel's life. We, therefore, wanted an original and sophisticated design that would please not only hotel guests but also local clients. The project has been in development for the last 5 years, and due to the pandemic, we put it on hold. It is such a miracle that we were finally able to make it happen," says the hotel's General Manager describing the project's inception.

"The main objective of the renovation of Oscar's bar was to create a representative place with a modern and high-quality design that offers excellent gastronomy and will be a meeting place for people. During the design process, we focused on making the bar have a different identity than the hotel, but at the same time, visually, it should be in harmony with it," adds Kateřina Joklová.

The international architectural design studio Jestico+Whiles, the studio behind the original design of the hotel in 2002, completed the Oscar's bar renovation. The main architect of the project Dominika Rošetzká describes the main idea of the new design: "The brief from the client was to come up with an original design that would attract people from outside. So I set out to create a bold design based on elements of concrete, wood and Plexiglas."

The basic elements of the interior are red, blue and black. The stone panelling from the hotel lobby, which partially extends into the newly refurbished space, has been retained but has been covered with a red PVC slatted curtain wall, creating a very distinctive wall. "The client's wish was to create intimacy and privacy, so we designed planters and black blinds around the perimeter of the bar, which can be drawn down as required. The main eye-catcher is the long coloured ceiling above the bar, which we created with technical assistance from Studio Fabrik8." specifies the architect.

The newly opened Oscar's bar is dominated by a solid wooden table with red TON chairs, seating up to 10 people. Above the table hovers an original light fixture created by Studio Fabrik8 based on a design by Jestico + Whiles.  Brandon L. Hammons was in charge of the realization for Studio Fabrik8, who collaborated with the architects and supplied most of the interior elements. The colorful ceiling above the bar, the planters lining the space, the red PVC slat wall and the wall made of ropes for climbing plants, the wooden table tops, the entrance gate and the illuminated logos with the Oscar's name, which are placed at the entrance to the bar from the hotel lobby and from Stroupežnicky Street. 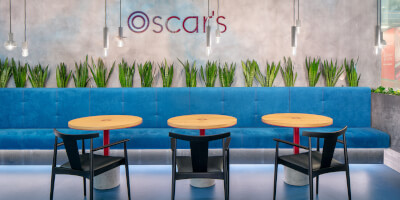 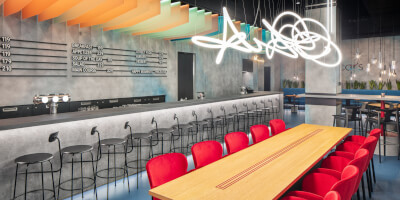 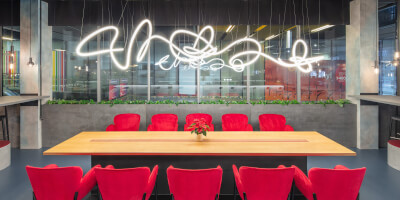