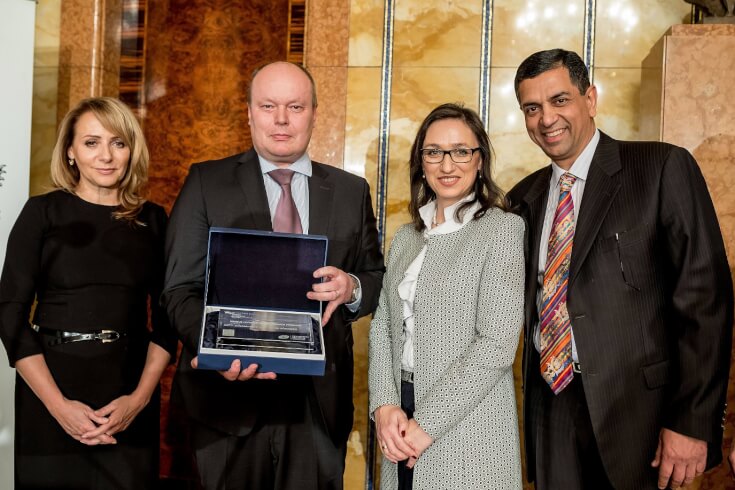 The 7th International Conference on Hydrogen Technologies took place in Prague in mid-July 2017. The first idea to bring the Conference to Prague occurred already in 2009, when the relatively newly established Czech Hydrogen Technology Platform (HYTEP) granted the auspices for the candidacy. Professor Dr. Ing. Karel Bouzek became the local ambassador of the seventh edition of the Conference. Professor Bouzek was then awarded for bringing the event to Prague at the Ambassador Awards Evening held annually by Prague Convention Bureau.

“Winning the candidacy was quite a challenge but the preparation and organization on such a level to meet all the delegates’ expectations was much more demanding,” commented Professor Bouzek, and he added: “Work on candidacy was coordinated with a help from the HYTEP for the scientific part and the C-IN PCO together with the Prague Convention Bureau for the organizational part. Candidacy was originally announced for a sister conference, World Hydrogen Energy Convention in 2016. Hydrogen Technologies were in their infancy at that time, and this type of conference has never before taken place in former Eastern Europe."

Although it may appear a surprising fact, with regard to the content of previous text, the history of hydrogen technology research has had a long tradition in the Czech Republic. Already in the 1960s, the development of alkaline fuel cells had been conducted, but later on, the activity was silenced in this field, and the renaissance occurred only with the beginning of the new millennium. "It is worth pointing out that in the Czech Republic, as in the first country of the post-communist block, a bus powered by a hydrogen fuel cell was developed and put into operation, and a hydrogen filling station was installed. And other projects followed. The last years are characterized by an increase in interest from both commercial and public spheres," commented Professor Bouzek.

The organization of the 7th International Conference on Hydrogen Technologies brought an international recognition to Prague and the Czech Republic as the destination developed enough in the field of hydrogen technologies to host one of the world's most important scientific conferences exclusively dedicated to this topic. It has undoubtedly contributed to the level that hydrogen technology has achieved in that time period. We asked Professor Bouzek, how the delegates perceived the conference: “The program consisted of a number of parallel sections covering a wide range of topics. Plenary lectures delivered by prominent personalities from the field of hydrogen technologies were received positively, and a concurrent exhibition awoke a great interest among participants and guests as well. Last but not least, it was a gala dinner held in Hergetova cihelna. The surroundings overlooking the Old Town were magnificent. Personally, I consider the biggest surprise to be the representation of participants from Japan, who were the most powerful national group. This tells a lot about how much attention Japan puts into the hydrogen technologies."

Professor Bouzek has been involved in the candidacy process for various events for more than twenty years. In 1996, he for the first time cooperated in the organization of a congress – the 4th European Symposium on Electrochemical Engineering (ESSE). "It was undoubtedly an interesting experience. The evaluation of the papers and all the agenda were still on paper without the support of electronic systems. The fact that the conference eventually proved to be successful is evidenced by the fact that it returned to Prague in 2008 (8th ESEE) and then in 2017 (11th ESEE) again,” professor Bouzek evaluates the impressions from the first conference organization. In the future, he would like to build on the success of the seventh edition of the International Conference on Hydrogen Technologies and apply for the organization of one of the forthcoming World Hydrogen Energy Convention (WHEC). In the meantime, he will continue to organize the already traditional Hydrogen Days event, which will take place for the ninth time again in cooperation with the C-IN. “This is a smaller format conference. However, we attach considerable importance to it, given the close links between the activities of CEE countries. Primarily, the Visegrad Group countries and Ukraine or Romania. The central position of Prague and the Czech Republic calls for building bridges between the West and the East of Europe," concludes Professor Bouzek. 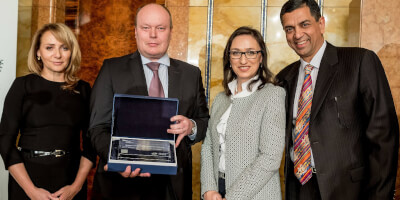