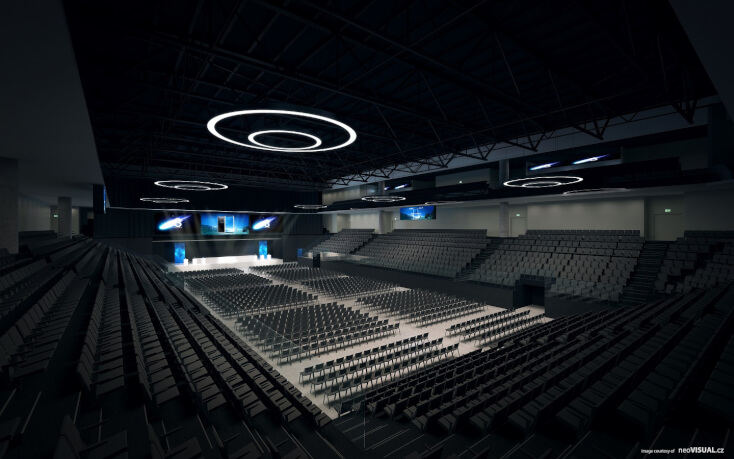 The construction of the new multifunctional cultural and congress centre O2 universum has advanced to its last part. Bestsport, which owns and operates the O2 arena, constructs a complex in the southern side of the O2 arena. The construction budget is about 1.3 billion CZK.

The rebuilding of the new multifunctional cultural and congress centre has begun on October 2017. In the first third of 2018, the demolition work of the original unfinished building took place. Afterwards, the rough construction was completed and now the final work is under construction. The project is based on the design of ATIP company, the architects Martin and Vladimír Vokatý.

“Overall, the construction of the new largest multifunctional congress and cultural centre of the Czech Republic continues according to the schedule. Currently, the walls of all the main halls are placed. The work continues with the distribution of all planned technologies, and at the turn of the year, the front facade will be glazed,” says Robert Schaffer, the chairman of board and CEO of Bestsport company and O2 arena.

The new complex which is directly linked to the O2 arena from the south has four floors and total area of almost 50 000 m2. The “small arena” will have 21 halls of different sizes at disposal in total capacity of 10 000 visitors. The largest hall with a capacity of up to 4.5 thousand people will be used as a space for organizing medium-sized concerts and sporting venues. On every floor of the complex there will be created 13 000 m2 for exhibitions and commercial use.

The building process of the O2 universum is scheduled to finish for the summer 2019.