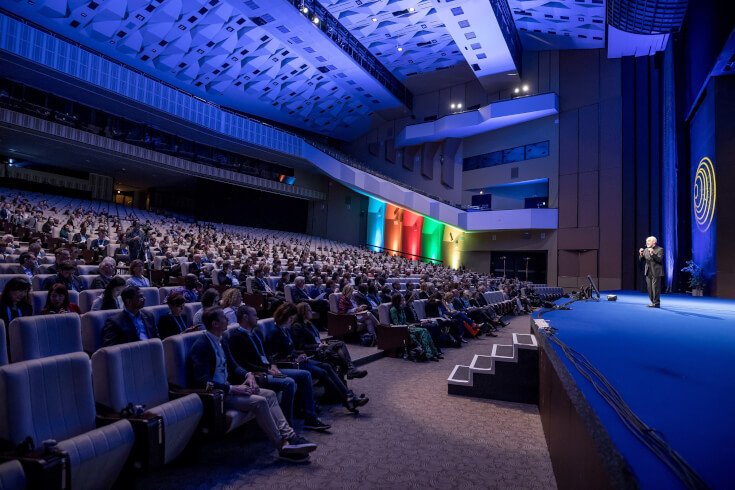 Tourism economy was heavily hit by COVID-19 pandemic in early 2020, paralysing the development of meeting, event and trade fair industries in the Czech Republic. According to the latest Economic Impact study conducted for the CzechTourism agency and the Czech Event Association in summer 2020, a total drop by more than 71% in consumption associated with holding events can be expected.

The scale of impact on the meetings, event and trade fair industries, which includes mainly congresses, conferences, trade fairs, business, sports and cultural events, is thus enormous. According to the study, total consumption in the sector will be reduced to CZK 27.1-39.3 billion, while it would reach between CZK 99 billion and CZK 131.5 billion under standard circumstances. At the same time, this means a drop in sales in multiplication from the original CZK 196.5-260.5 billion to mere CZK 52.9-77.2 billion. The impact on revenues for public budgets can also be derived from this amount. These would drop by almost 73% to CZK 10.1-14.7 billion. The irreplaceable benefits for public budgets will then drop by more than 94%.

However, the meetings, event and trade fair industries are not only an important part of the economy, but they also are non-negligible sectors in terms of employment. Under standard circumstances, the industry would generate nearly 160,000 full-time jobs in 2020.  Up to 71% of them are now at risk.

Companies operating in this sector thus seek to draw attention to the consequences the impossibility of organizing events in the Czech Republic brings. In addition to the impacts on the economy and employment already mentioned, the lack of conferences and congresses brings with it a lack of scientific know-how as well. Events with a scientific or professional focus significantly contribute to generate an inflow of new information to destinations and facilitate knowledge sharing among capacities in individual subject areas. The local community – citizens of the Czech Republic – is the chief beneficiary of the obtained know-how, whether in the form of new technologies, medical procedures or legislative changes.

Moreover, the return of international events cannot be expected this year. According to data from the Prague Convention Bureau, all congresses and conferences originally planned for 2020 in Prague, including autumn dates, have been rescheduled to 2021 or later, or even cancelled without compensation. Despite the government easing the restrictions, concerns remain about travel and larger gatherings, and corporate companies still apply the travel ban to their employees.

Industry alliance consisting of key players of industry, namely the Czech Event Association, Prague Convention Bureau, Community of Organizers of Trade Fairs and Exhibition Events, Czech Alliance of Professional Congress Organizers, Trade Fairs Brno, O2 universum, and Prague Congress Centre created a set of possible support measures, and addressed it to the Czech government. The measures would allow the industry to sustain employment and retain skilled labour in the sector in the long term, they would compensate for the thwarted costs of preparing the events that have not taken place, or support the introduction of safety and hygiene measures for events. At the same time, they would help to reactivate the demand for event services in the Czech Republic by creating a special fund for financial incentives for the meetings industry, reducing VAT on registration fees, support for congress and conference candidacies or executing marketing campaigns.

"In the last decade, the congress industry in the Czech Republic has been on the rise. According to data from the Czech Statistical Office, which monitors only conferences and congresses in mass accommodation establishments with an attendance of more than 50 delegates, the number of such events has been continuously increasing since 2009 in the Czech Republic. In 2019, the number reached a record of 14,726 events attended by almost 1.5 million people. Therefore, our common goal is primarily to support the demand for events in the Czech Republic and at the same time to maintain the long-term position of the destination in international competition,"  says Roman Muška, Managing Director of the Prague Convention Bureau.

"Congress tourism is key to the economic development, as it brings solvent international clientele to the Czech Republic, and at the same time it contributes to the development of international scientific cooperation. The average daily expenditure of a foreign participant in Prague is estimated at CZK 5,756, which is roughly twice the total average expenditure of an ordinary tourist," said Jan Herget, Managing Director of CzechTourism, adding: "Unfortunately, this sector is among the most affected. Mass events have been cancelled as one of the first, due to the spread of coronavirus, and are among the last to start taking place again. Public budgets will thus lose up to CZK 37 billion this year alone."

Lenka Žlebková, CEO of the Prague Congress Centre, adds: "In addition to the economic benefits of this sector, we should not forget the scientific and innovative impacts of international professional meetings and conferences. Thanks to its extended reach, this segment helps to strengthen the position and competitiveness of the Czech Republic internationally. Inaction will result not only in a temporary decline of the industry but also a significant long-term loss of position on the international market and the absence of prestigious professional events over the next decade."

"The fact that the trade fairs and meetings sectors have been put on hold for six months is economically intolerable. The epidemiological measures currently in place are completely inadequate and impracticable for trade fairs and meetings. This concerns mainly the system of sectors," added Jiří Kuliš, CEO & Vice-Chairman of the Board of Trade Fairs Brno.

"Mass events were banned by the first government measure in March and have not yet been permitted. Even after six months, we do not know when we will be able to start. At the same time, it takes at least a year to prepare an event with a large number of participants, and which of us has the reserves to cover the revenue shortfall for almost two years? If the state should be able to help, it should be primarily in this area," explains Robert Schaffer, CEO of Bestsport, which operates the O2 universum.

"Events are one of the most creative and the most varied sectors in the industry. They create a space for meeting people and thus generate new opportunities and new ideas contributing to the commercial and cultural development of the whole society. But the entire events industry has been hurled into a crisis unprecedented in modern history. The existence of thousands of businesses, tens of thousands of workers and billions of investments is under threat. We lack dialogue with state power about the deployment of smart measures to help get the industry back on track and about state investments in the industry, which has for many years been bringing above-standard multiplications, as evidenced by the analysis published today," adds Vít Rozehnal, chairman of the Czech Event Association.

"Trade fair area is mainly a meeting place for the professional public, serving as a support of trade and industry. People at trade fairs are very responsible and intelligent personalities. Meeting at the trade fair is far less dangerous than visiting a shopping centre, which according to statistics is visited by about 50,000 people daily. I propose to exclude trade fairs from the category of mass events or to increase the number of participants present in an area sector," concludes Tomáš Kotrč, chairman of the SOVA Association.

Please download the official press release and the impact study (in Czech) in PDF here.