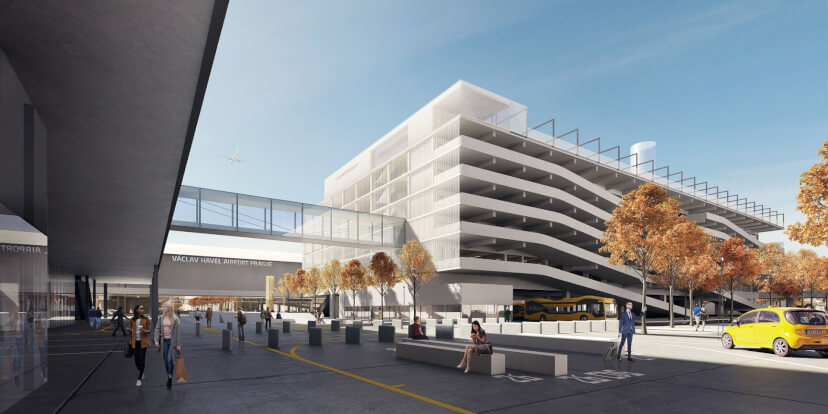 Until June 11, Václav Havel Airport Prague passengers and visitors have the opportunity to see an exhibition of the architectural design concepts of a new public area in front of the extended Terminal 2, which includes two new parking garages, a new backbone connecting building, and the so-called Plaza, i.e., an outdoor area in front of the future terminal. Design concepts emerged from an open architectural competition, in which studios from the Czech Republic and abroad participated. The jury selected the D3A studio as the winner.

The exhibition is located in a connecting building between the two terminals, and it is situated in the airport public area and, therefore, the general public can also visit it. The displayed visualisations show the future appearance of the public area in front of Terminal 2, which will become the airport’s central point after the expansion and changes within the organisation of passenger movement.

“In the future, Prague Airport should undergo extensive construction modifications that will significantly change its appearance. The overall transformation of the transport solution around the terminals, completion of Terminal 2, and implementation of new buildings and adjacent public areas will represent one of the largest investments into the new infrastructure over the last ten years,” says Václav Řehoř, Chairman of the Prague Airport Board of Directors.

A new public and charter bus transportation terminal will be located on the ground floor of the new parking garages, the purpose of which primarily rests in increasing the comfort of airport parking. These facilities will largely replace the existing parking capacities, and they will be built on the premises of the current PB Economy parking lot and the PA Smart parking garage, which will be eliminated. “The new parking garage facilities fulfil the long-term development plan for Prague Airport. I believe that they will contribute to the modernisation of parking services and, at the same time, increase the comfort and safety of passengers,” adds Václav Řehoř.

When addressing the new parking garages, Prague Airport also focuses on the future and new technologies. Parking garages are expected to have a sufficient capacity for electric car charging stations, robotic parking utilising autonomous mechanisms, and advanced IT technologies to monitor occupancy and safety. The layout of the parking garage is variably directed towards the future car-sharing expansion.

The Skywalk and Plaza will be built together with Parking Garage A and B. The Skywalk is a new structure connecting the existing and newly planned facilities in the Aviatická Street axis. The three-storey building will serve as a pedestrian traffic highway between terminals and other facilities. However, its design also allows for the possible emergence of shops, restaurants, and other leasable premises.

On the other hand, the Plaza was conceived as a front area of Terminal 2 and Aviatická Street. There will be new public areas, which should feature a lot of greenery. At the same time, this public area should become a model for other external airport areas.

In the coming months, a team consisting of Prague Airport representatives and award-winning studios will work on completing and expanding the study based on comments and additional requirements. The project preparation for Parking Garage B will follow, and the affected part of the Plaza will be planned between 2019 and 2021. Prague Airport could begin construction of the first parking garage between 2021 and 2023. 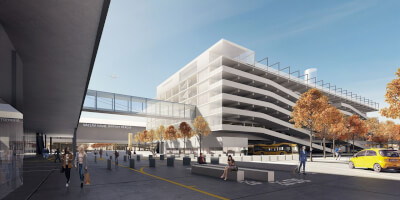 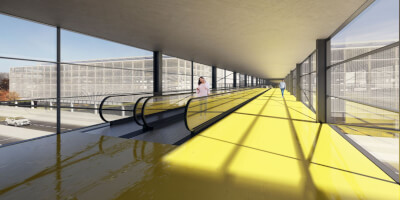 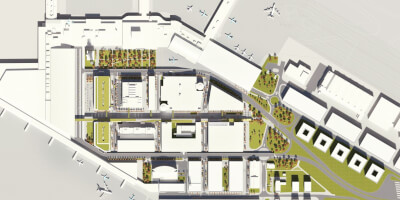