World Reputation and Long-term, Complex Activity are the Critical Factors for Scientists Considering the Candidacy for an International Congress 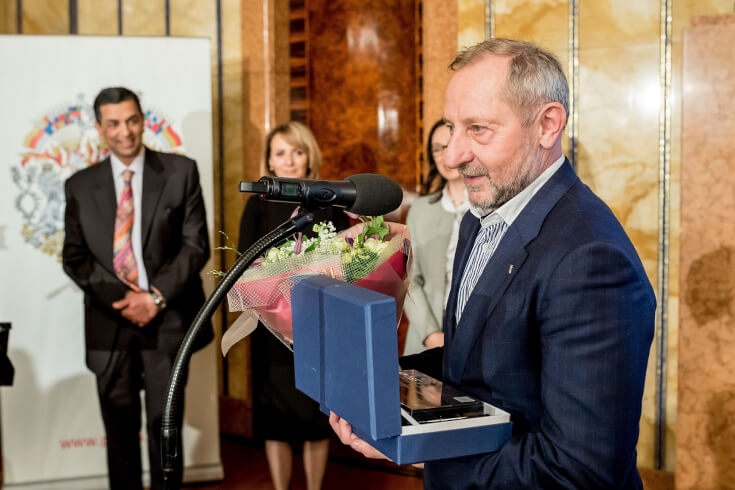 The International Conference of World Gastroenterology Organization (WGO) will head to Prague in 2020.

The work on Prague candidacy has taken more than a year. Professor MUDr. Julius Špičák, CSc., who has been actively involved in the organization of the congresses and conferences since 1990, became a local ambassador of the event. WGO 2020 Conference is expected to be the second largest conference event in the field of gastroenterology which he will organize. Professor Špičák was awarded for this candidacy within the Ambassador Awards Evening, which is annually held by Prague Convention Bureau.

The specificity of this candidacy laid mainly in the fact that the Conference will take place in the new multifunctional O2 universum centre, which was under construction at the time of the candidacy. "The fact the congress centre is still under construction does not matter so much," says Professor Špičák, adding, "It is always difficult to hold a so-called irregular conference with great ambitions because the international gastroenterological community does not count on it in advance. We won the candidacy because we have a reputation and that the organization believed we were able to handle it, even financially. It is a big challenge.”

It is the challenge that Professor Špičák considers the most appealing factor of the work. According to his words, it is a challenge similar to someone’s desire to climb mountains. The Congress of Czech Gastroenterology Society in Karlovy Vary, Czech Republic, was the first event professor Špičák co-organized in the 90s. However, there is another congress professor Špičák considers to be the breakthrough one: "The ESGE International Congress was a milestone for me with a live broadcast of endoscopic methods in 1993. We went to the unknown, but we succeeded. The broadcast technology was all Greek to us, but in the end, it met all the parameters, and we had a great international response, from which we are still benefiting.”

Professor Špičák considers the long-term, complex activity to be one of the key factors for those scientists who are thinking about joining the candidacy process. “It is not possible to cooperate on a candidacy without the worldwide reputation of the team either. The team has to publish regularly, communicate, has to be organizationally capable and mainly – to be strongly willing to do this job,” concludes Professor Špičák.