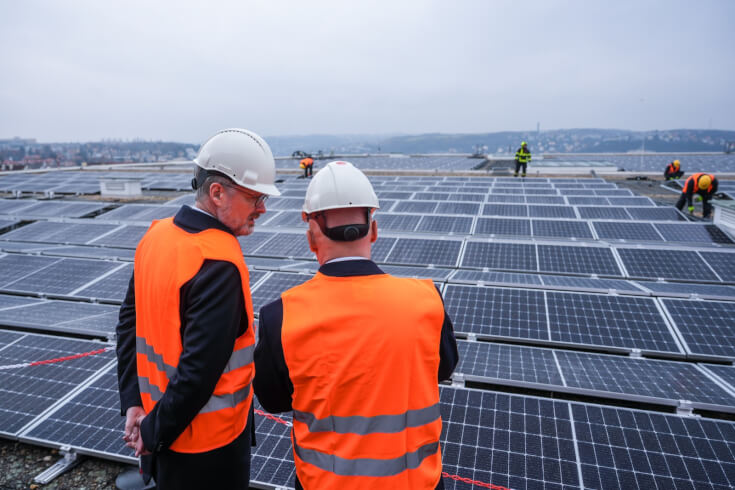 The construction of the largest solar array in the centre of Prague has commenced at the Prague Congress Centre (PCC). A total of 2,080 solar panels will be erected on an area of 7,000 square metres, which will save the Prague Congress Centre CZK 5.5 million a year in electricity costs. The solar power plant will be an addition to one of the largest energy savings projects in the Czech Republic, which is being implemented in the PCC by ENESA, a subsidiary of ČEZ ESCO. The project has already saved the centre CZK 32 million this year.

The shareholders of the Prague Congress Centre are the Ministry of Finance of the Czech Republic and the City of Prague. "I am glad that PCC, as a publicly owned company, is setting an example. Energy savings and new renewable sources are exactly what we need during the current situation to reduce energy costs and increase our energy self-sufficiency and independence from Russian energy," said Czech Prime Minister Petr Fiala during a visit to the Prague Congress Centre.

"We have recently observed a clear trend in Czech companies and public institutions: reducing energy costs goes hand in hand with consistent decarbonisation and efforts to operate in a more sustainable fashion. Our task at ČEZ is to assist with this as much as possible. The largest solar array in the centre of Prague will add to one of the largest energy savings projects in the Czech Republic and will increase the annual savings of the Prague Congress Centre by more than 5 million," added Daniel Beneš, CEO of ČEZ.

The construction of the photovoltaic power plant, in which besides ČEZ ESCO, the company GreenBuddies is also participating, was commenced during the Czech Presidency of the European Union, during which PCC plays an important role as the venue for informal meetings of the EU Council.

"We considered a solar power plant on the roof of PCC several years ago. Even though we have a very good price for electricity throughout the remainder of the year, the situation on the energy market made us accelerate this project and we decided to initiate the installation during the Czech Presidency. Photovoltaics will cover about ten percent of PCC's energy consumption, and are directly linked to a comprehensive energy saving project that has been running for six years and saves us more than CZK 30 million annually," explains Aleš Bartůněk, Chairman of the Board of Directors of PCC.

PCC will use ČEZ ESCO's innovative model called "Photovoltaics for CZK 1". PCC will thus acquire a power plant with an installed capacity of 936 kWp without any investment costs. The costs of the project will be borne by the supplier ČEZ ESCO, which will build the photovoltaic plant for the customer and subsequently operate it. PCC will repay the investment in the price of the electricity consumed. At the end of the 13-year contract, the Prague Congress Centre will buy the PV plant for just one CZK and will continue to generate its own energy.

Building a photovoltaic power plant in the centre of Prague and with dimensions larger than a football field is not a simple matter. For example, the designers had to prove by testing a sample of panels placed on the roof that the sun's rays falling on their surface would not dazzle not only the surrounding area, but also, for example, visitors to the Petřín lookout tower several kilometres away. Despite these obstacles, the pace of installation is fast - just over half a year will separate the start of design preparations and the placement of the last panel.

PCC management has been trying to reduce the energy consumption of the building since 2016, when a technologically unique energy savings project was implemented using the EPC method, which is being implemented for PCC by ENESA from the ČEZ ESCO group. EPC means that the contractor directly guarantees the amount of savings in the contract.

Thanks to the modernization of heating, air conditioning, lighting and cogeneration at a cost of CZK 135 million, it has managed to reduce energy costs by CZK 50 million this year alone, calculated at the current high prices. The total guaranteed savings over the 10 years of the project will amount to at least CZK 235 million and reduce consumption by 30 percent.

"The EPC project in the Prague Congress Centre is a pioneer in the field of technological interconnection, where the synergy between heating and air conditioning is used to the maximum extent possible. Thanks to the sophisticated technical solution, it is 100% true that the cheapest energy is that which is not consumed. Photovoltaics on the roof will make the operation of the building even cheaper and will also reduce the carbon footprint of the building," explains Kamil Čermák, CEO of ČEZ ESCO.

"In one of the largest rooftop installations in the Czech Republic, we are applying our extensive experience from similar rooftop and ground-mounted power plant projects at home and abroad. We use SolarEdge inverters, which minimise voltage during a malfunction, and in line with modern trends, we also use roof structures that are not installed by drilling into the roof, but only by loading," concludes Aleš Spáčil, Sales Director of Greenbuddies, a company that handles photovoltaic installations.

The power plant is expected to start up as early as next spring. 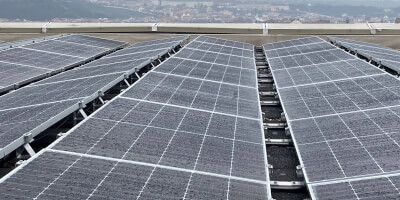