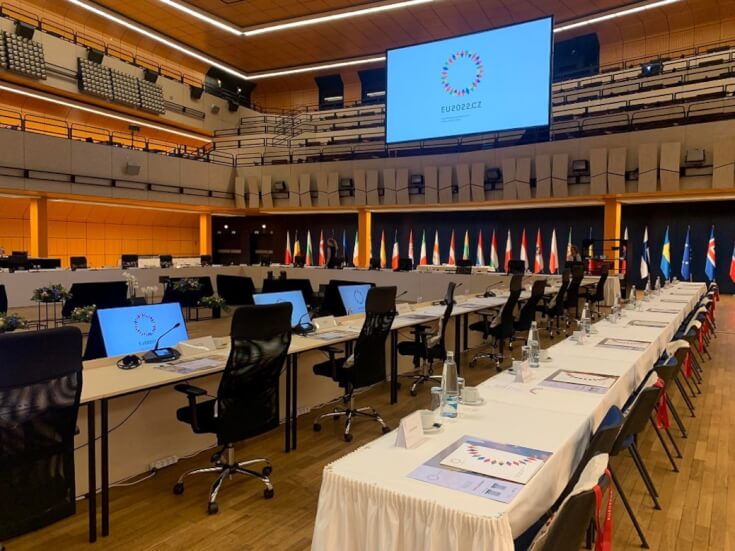 Czech Republic enters the second part of its presidency in the European Union. C-IN is the main organiser of the events such as informal meetings and conferences in the Prague Congress Centre, congresses for the Parliament, and for the capital city of Prague. Last but not least, C-IN had the honour to organise the Summit of Presidents and Prime Ministers of the EU Member States at the Prague Castle.

The six months of the Czech Presidency in the Council of the European Union started in July with the opening ceremony in Litomyšl. All of the following events were then transferred to the capital city of Prague, especially to the Prague Congress Centre (PCC) at Vyšehrad, where C-IN took over the organisation. In the first three months of the presidency, there have been more than 30 congresses from 8 ministries in the PCC. One of them was the Ministry of Interior, which had an Informal meeting of the ministers. „C-IN was a huge help with realization of this event, with the preparations of the space, meeting rooms, catering, or technical equipment. Thanks to their willingness and flexibility of their employees, we were able to successfully arrange the meeting to the satisfaction of all participants,“ says the senior ministerial council of the Ministry of Interior and their main coordinator Daniel Nejepínský.  The Ministry of Justice had a two-day congress on the topic of insolvency during September. „C-IN has always approached us in the best possible way even above their liabilities from the closed contract. We can for example highlight their goodwill with the mediation of the online participants, which primarily wasn´t in the requirements. The communication was done quickly and on time through formal and also informal channels,“ evaluates the cooperation with C-IN ministerial council on the department of international cooperation at Ministry of Justice Anna Perchuk.

The Czech Presidency is already halfway through, and it has been three demanding but very pleasant months. „Many projects and the complexity of cooperation with the Czech Government Office have been keeping our firm very busy. Imagine having planned 40-50 congresses for this year and suddenly you have to add more than 70 events within the Czech Presidency to your list! There are 9 people from C-IN intensively working on these huge meetings, which is really an admirable performance,“ states the Managing partner of C-IN Aleš Pejsar.

C-IN is a Czech firm, which organises congresses, conferences, and meetings all around the world. This year the company celebrates 20 years since its founding. C-IN has done more than 1000 projects for subjects from the medical, academic, corporate, or even government sectors. C-IN profiles as a professional event organiser especially for long-term cooperation, as a so-called Core Professional Congress Organiser (PCO) regardless the size or location of the given event.