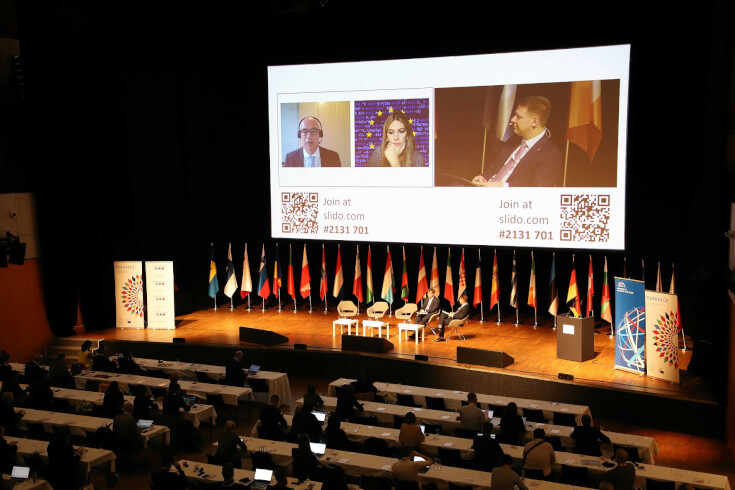 On December 31, 2022, the Czech Republic concluded its six-month presidency of the Council of the EU. As part of the Czech presidency, a number of activities and events took place around the whole country, but the most important political meetings and summits took place at the Prague Castle and in the Prague Congress Centre (PCC). During the past six months, more than 2,400 European politicians and economists attended the informal EU Councils in the PCC. The number of events and delegates, however, is only one of many things that made last year's presidency different from the first one in 2009.

CF, IMF, NATO and EU under one roof

Since its opening in 1981, the PCC has been a unique building through which modern Czech history has passed and, since 2000, even the world history. In December 1989 the dissidents from the Civic Forum met here with communist leaders to negotiate the fall of the communist regime, in 2000 the Annual Meeting of the International Monetary Fund and the World Bank was held here, and two years later the NATO Summit followed. It was in the Prague Congress Centre that Václav Havel met with the Dalai Lama or Barack Obama. In 2009, the Council of the EU met here for the first time, and in 2022 the presidency returned to the PCC.

During the first Czech presidency in 2009, the Prague Congress Centre hosted 43 events, last year there were 65 of them there. "All of 14 informal EU Councils, i.e. summit meetings of ministerial delegations, took place in the PCC and over 2,400 delegates from all European countries attended. The biggest event was the EU Digital Future conference with 500 participants," adds Lenka Žlebková, CEO of the Prague Congress Centre. The two-day conference focused on cyber security and technological innovations was opened with video speeches by the Czech Prime Minister Petr Fiala and Ursula von der Leyen, President of the European Commission.

Higher resolution, faster data transfers and more fresh air in interpreter booths. This is what CZ PRES 2022 meant for PCC, too. Hosting the top political events included strict technological requirements, which included the need to install 22 kilometres of new optical cables to connect all conference halls and foyer with the Press Centre. This allowed seamless transmission high quality sound, 4K video and 24 interpretation channels. In addition, all 10 interpretation booths were equipped with air quality monitoring system to prevent CO2 accumulation during long meetings.

Another technological innovation compared to the previous presidency was also setting up of a special connection spot for TV broadcast cars, which enabled instant full-fledged live TV transmission without the need of installing any additional cables. The main congress halls where the discussions were held were equipped with robotic cameras that enabled automatic recording of the delegate who applied for the floor. And finally, all meetings were run in a hybrid mode that allowed secure remote connection of guests to the event, including provision of full-fledged simultaneous interpretation of their speeches to all guests in the hall.

Sustainability principles not just in electromobility, but also in catering and photovoltaics

The emphasis on sustainability was present not only in the program of the presidency, but also in the organization of all events. PCC solved the power supply for electric cars used to transport guests and delegates by installing the largest charging hub in Prague at the venue. Directly in the public parking lot in front of the centre, in cooperation with PRE electricity provider, a hub with 8 charging stations was placed, all of which are now fully available to the general public and will stay there permanently.

Sustainability in practice was also demonstrated by the local Zátiší Catering cooking team, which took care of refreshments for all delegates. Thanks to the location of complete cooking facilities right in the PCC building, all meals and drinks were prepared without the use of plastic waste. Serving fresh food immediately from the kitchen not only saves time and costs, but also reduces carbon footprint and waste. In addition, the catering team relied on local suppliers and fresh ingredients, including herbs from the PCC own garden.

Sustainable operation is the long-term goal of the Prague Congress Centre. "The entire building has undergone a comprehensive energy management review in the past six years, followed by the installation of new energy management systems and a number of smart saving measures as part of an EPC project run by the ENESA energy company. The project was awarded the Czech Energy and Environmental Project of the Year 2019 and has brought the annual savings on energies worth more than 1.2 mil. EUR to PCC," explains Lenka Žlebková. The final stage of the project was marked by the installation of a giant photovoltaic power plant on the roof of PCC, which was completed just at the end of the Czech presidency and will cover 10 percent of the energy consumption of the entire PCC. All this enables the Prague Congress Centre to ensure the maximum possible sustainable operations and to organise sustainable events, including those that were part of the successful Czech Presidency of the Council of the EU.