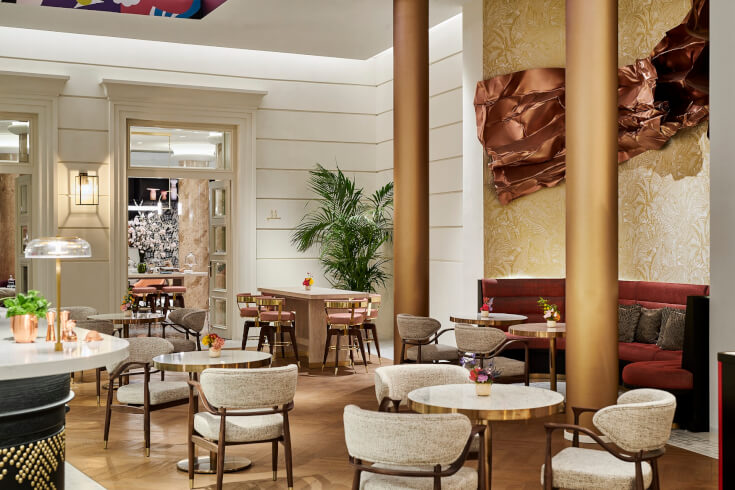 Hotel Andaz Prague was awarded in the international SBID International Design Awards competition. The prize was awarded to the Madrid Brime Robbins studio for interior design in the "Hotel Rooms and Suites" category in one of the most prestigious design competitions. The five-star Andaz Prague Hotel is located in the newly renovated building of the Sugar Palace on Senovážné Square in the centre of Prague.

The stylish and impressive interiors of the luxurious lifestyle Andaz Prague hotel from the Hyatt chain combine refined design with art. The designer duo Maria Brime and Garrett Robbins were inspired not only by history, but also by Prague myths and legends, with such characters as princess Libuše or Golem. The design preserves and highlights the historical segments of the former Sugar Palace while emphasizing the identity of Prague. Individual allegorical elements, such as the original reliefs in the shape of a lion's head reflecting the legend of Bruncvík or Art Nouveau elements depicting the past of the building, were created by Czech craftsmen.

"Our recent victory at the SBID International Design Awards 2022, along with the third place at International Architecture & Design Awards 2022, is a great honor for us," said Garrett Robbins and Maria Brime, founders of Brime Robbins. "The Andaz Prague project means a lot to us, we put our heart into it when designing it. We have shared our passion and sense of community with partners UBM and Hyatt and now with Prague, the Czech Republic and the world. Winning the competition confirms how important it is to create something very human. Andaz Prague emphasizes the impact of storytelling on our lives, no matter where you come from. We enjoyed finding ways to tell stories of Prague and the Czech Republic, but also creating moments to pause and reconnect with something inside that some didn't even know was there."

„We are very pleased to receive such an important international award for the interior design of hotel rooms. And our joy is multiplied, because it is another success following the recent victory of the Andaz Prague Hotel in its category of this year's prestigious domestic Best of Realty competition," says Josef Wiedermann, Managing Director of UBM Development Czechia.

The luxury hotel was created by reconstructing the heritage building of Sugar Palace by UBM Development Czechia. The historical value of the building with its authentic atmosphere has been preserved, while adapting to the high demands of the international Hyatt network, which has been operating the five-star Andaz Prague Hotel since March 2022. The UBM Development Czechia team cooperated very closely with conservationists and restorers, as the building of the Sugar Palace on Senovážné Square is an immobile cultural monument. As part of the reconstruction, special attention was paid to the original historically valuable preserved interiors, which were sensitively renewed and restored. These include, for example, the meeting room of the Assecuration Society of Sugar Producers, situated in the bridge leading to the Jindřišská Tower, where the conference room is located nowadays, or the marble staircases with stucco decorations.