Prague Will Host the Congress of Congresses 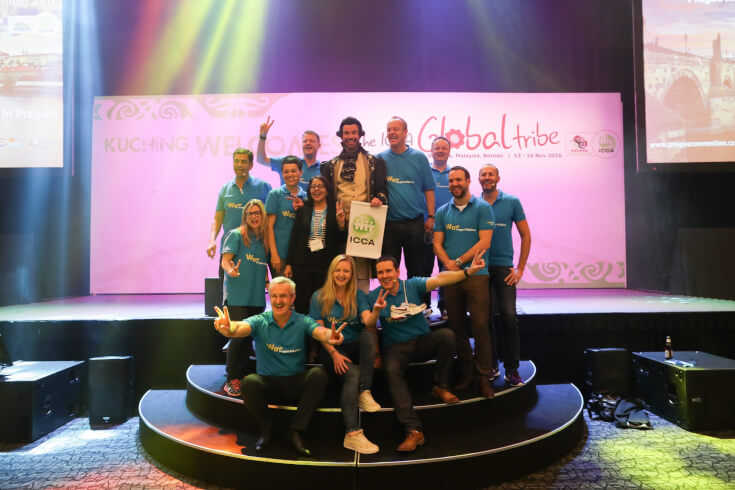 PCB team together with the Local Host Committee representatives from among the International Congress and Convention Association (ICCA) members and supporters attended 55th ICCA Congress held in Kuching, Malaysia. Borneo Convention Centre Kuching hosted the event from 13th to 16th November, and it was also the place where Czech team took over the congress flag and organization of the 2017 Congress. Next year in November, MICE experts from all over the world will gather in Prague for 56th ICCA Congress.

International Congress and Convention Association represents more than one thousand members from the field of event organizing, transportation and accommodation from more than 90 countries. The annual ICCA Congress serves as a platform for networking, education and best practice sharing for the association members and newly also for pre-selected association delegates. At this year’s Congress, Czech team took over the congress flag and organization of the 2017 Congress, for which Prague Convention Bureau bid successfully in 2014.

The key role of the Czech team was to introduce Prague as the next host city and also invite Kuching attendees to the Czech capital. 55th Congress began on 13th November with stunning fireworks and welcome dinner presenting the best of the Malaysian cuisine. The next days were packed with activities. Czech team provided delegates with basic MICE information about Prague and the Czech Republic. Those interested could stop by at a Czech stand available right in the Convention Centre and get various promo and information brochures, or see Czech sights through virtual reality glasses and 360° videos by “Kudy z nudy” project of the CzechTourism agency. Educational sessions of Filip Dřímalka, a digital technology expert from the EF1 marketing & management company, were ready for the participants on the spot. The end of the second day belonged to the CAT night organized by British publishing house CAT Publications. There was a competition run among the teams from various regions during the CAT night. CEC region, represented among other by three Czech delegates, together with the Middle East region took first place in the category of knowledge disciplines.

The ICCA Best Marketing Award 2016 was granted on Tuesday, 15th November. The award went to London for the #LondonIsOpen campaign. During the morning session, Sanjiv Suri, President of the PCB Board of the Directors, gave a lecture on current trends in modern gastronomy. The third day of the Congress culminated with farewell dinner, where each participating country showed their national costume. Our team, dressed in the national hockey jersey, presented the Czech Republic as a hockey destination. The last day of the Congress was dedicated to seminars and the closing ceremony where the congress flag was handed over to Czech team. The presentation of Prague as the next host destination took place during the ceremony as well. Delegates could see a specially created invitational video and live performance of opera singer Martin Matoušek with an aria from the opera Don Giovanni, first performed in 1787 in the Estates Theatre in Prague. Afterwards, Czech delegates invited the attendees to Prague for the next 56th ICCA Congress and also to the Next Destination Lunch where Czech specialities as svíčková (beef with dumplings), duck with cabbage, kulajda (dill soup), strudel or Pilsner Urquell beer were served. Typical Prague brainteaser – Hedgehog in the Cage – was given to all the attendees as a reminder of the capital. At the same time, competition on social media for those interested in participating in Prague Congress was launched. The aim of the contest is to take a picture or shoot a short video capturing a bridge in any form and share this post on Twitter or Instagram till 30th April 2017. The winner will be announced at the IMEX Frankfurt fair. The competition is a part of the whole year’s #BridgetoPrague campaign supporting the 2017 ICCA Congress in Prague and presenting the capital as an important historical, cultural and business crossroad. What’s more, Charles Bridge – one of the famous Prague monuments– will celebrate the 660th anniversary of the laying of its foundation stone next year.