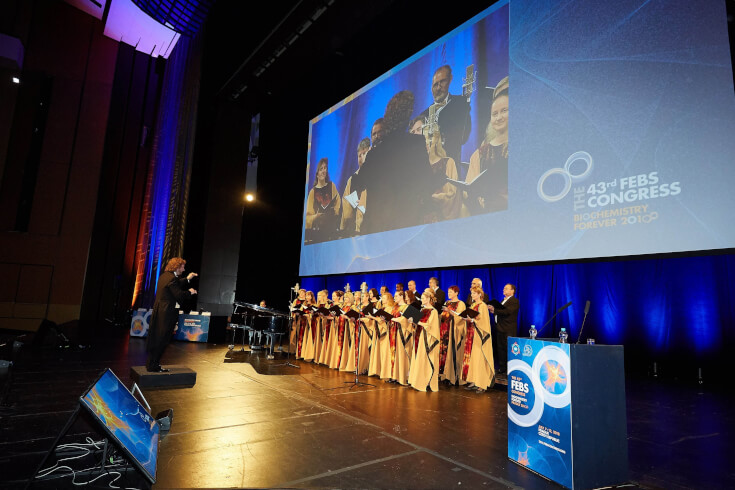 The 43rd Congress of the Federation of European Biochemical Societies (FEBS) brought Scientists of biochemistry and molecular biology to the Congress Center in Prague last week. The central symbol of the Congress became the mathematical sign for infinity and the motto "Biochemistry forever".

On Saturday, 7th of July, the six-day program of this year's 43rd FEBS Congress began, featuring not only top experts from around the world, but also students and three Nobel Prize winners in chemistry. The congress offered visitors a rich program including plenary lectures, scientific sessions, workshops, poster presentations, as well as social and cultural evening activities. After the opening ceremony, Professor James E. Rothman of the United States opened the congress with an introductory lecture. One of the plenary speakers was also Vice-Rector of Charles University in Prague, Jan Konvalinka, who was awarded by FEBS with the Datt medal for the contribution to European biochemistry.

Professor Tomas Zima, Chairman of the Organizing Committee and one of the Presenters, said: "The Czech Republic has become the host country of the event for the third time, and it was again a great choice for both the scientific and the organizational aspects. 2,036 participants from 67 countries of the world were satisfied not only with the high-quality professional program but were also enchanted by Prague, one of the most beautiful cities in Europe. A huge benefit of the congress is that 65% of the participants were young beginning scholars and PhD students from all over the world, whose work was selected in thematic lectures and posters. I like the opportunity for young people, enlightened future colleagues, to get in touch with top experts, to improve their presentation skills and to defend their own opinions."

This international gathering is held annually with the support of the Federation of European Biochemical Societies, with an average of 35,000 European scientists. The notional relay pin will be handed over to Prague by Cracow, who will host the congress in 2019. "Since we organized this event for the FEBS association for the second time, we roughly knew what to expect. We were ready to run the program again in several parallel sections, and the fact that the FEBS Congress always has about 200 called speakers, which is a really large number. We are delighted to have been able to welcome more foreign participants in Prague than in 2009 when we last organized the FEBS Congress, "added Daniel Švarc of the C-IN project team that organized the event.